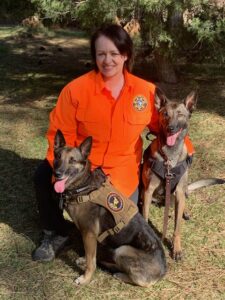 Her current partners are K9 Talyn, an 8 yr old Belgian Malinois, and K9 Kuma, a 3 year old Belgian Malinois/Dutch Shepherd, both certified in HRD (humane remains detection) through NAPWDA. Talyn has many missions under her belt and is the most experienced in our county. She has had multiple finds and has helped bring several loved ones home. Kuma is a big powerful girl who is well on her way of becoming a great search dog. 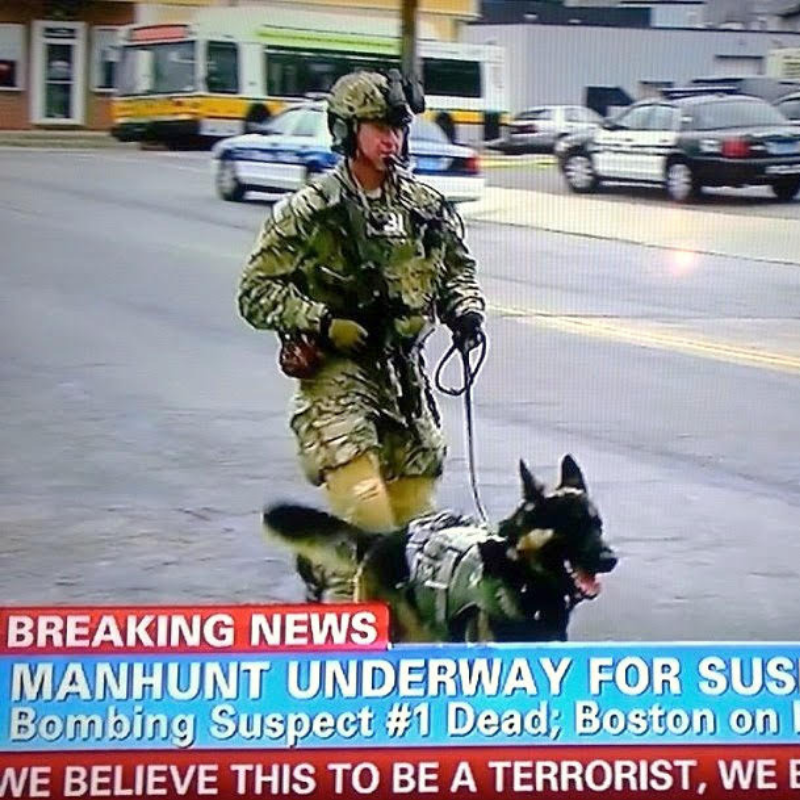 Mike Skinner retired from the FBI in July of 2015 after serving for over 29 years as a Special Agent. His investigative duties included violent crimes, bank robbery, domestic and international terrorism, fugitives, and gang cases.

Mike was also tactical operator on the FBI Hostage Rescue Team for 11 years, during which he was involved in numerous high-risk and high-profile tactical incidents. Mike’s last assignment was as a tactical canine handler with HRT. Mike and his K-9 partner were deployed across the United States with the Hostage Rescue Team, FBI field offices, and other military and law enforcement agencies. 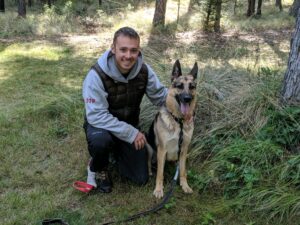 Alex has been involved in K9 since 2017 when he got involved during veterinary school. He started with K9 Hera who has held certifications through IPWDA (airscent/area), NSDA (Large area live/cadaver), and currently NAPWDA (human remains detection). K9 Hera is now an 8 year old German Shepherd. 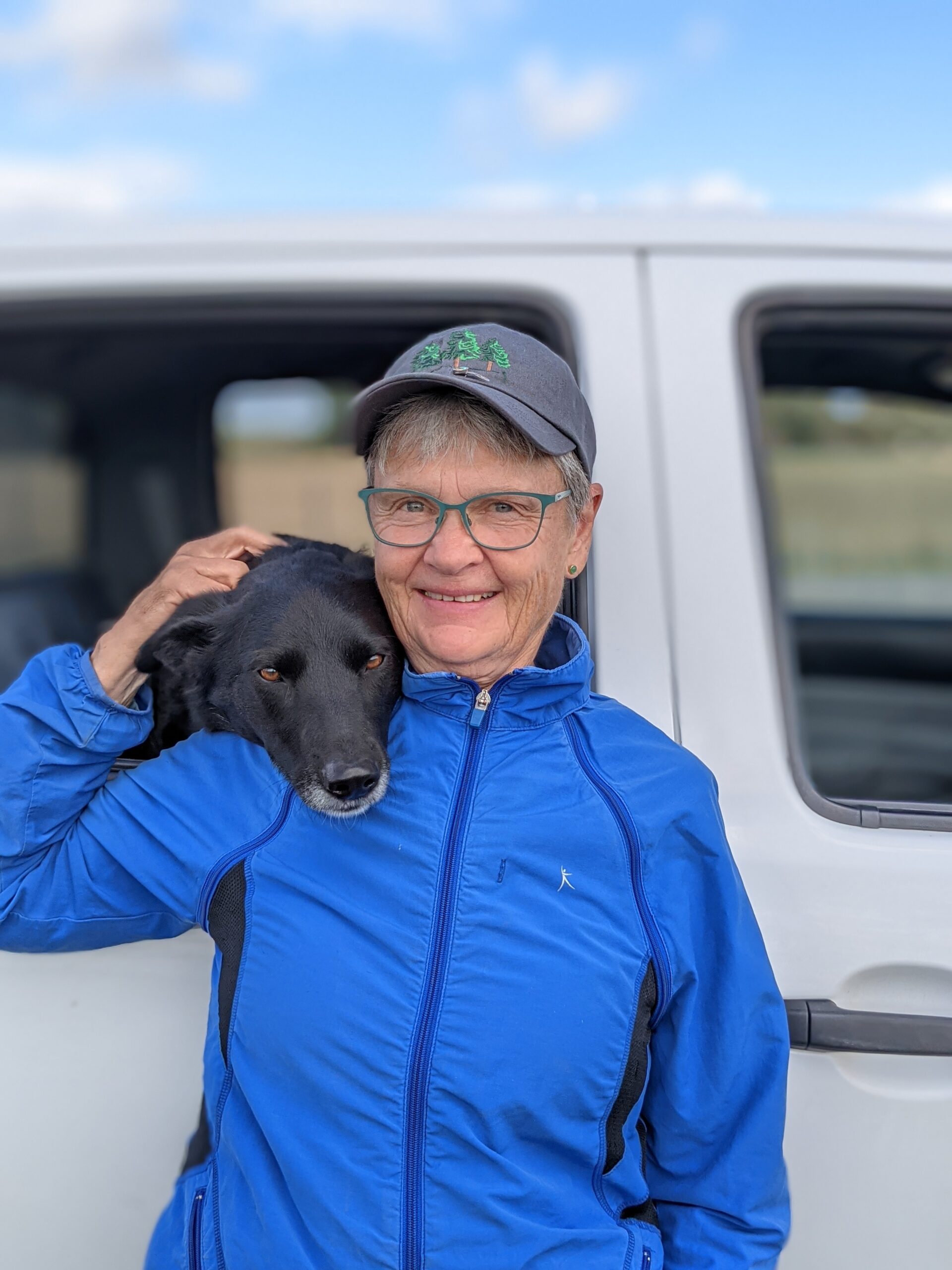 Cyndy Mullings started training her first search and rescue tracking dog in 2014. Working together with “Elsie” (an Australian Shepherd) she became certified in tracking/trailing and HRD 2015. These certifications were achieved through the International Police Work Dog Association and the North American Police Work Dog Association. Absolutely loving the partnership of a working dog, in 2018 Cyndy started training her second dog “Cricket” who is a Border Collie Mix. Cricket certified with NPWDA in tracking and human remains detection. 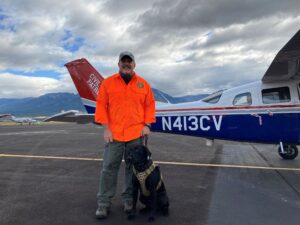 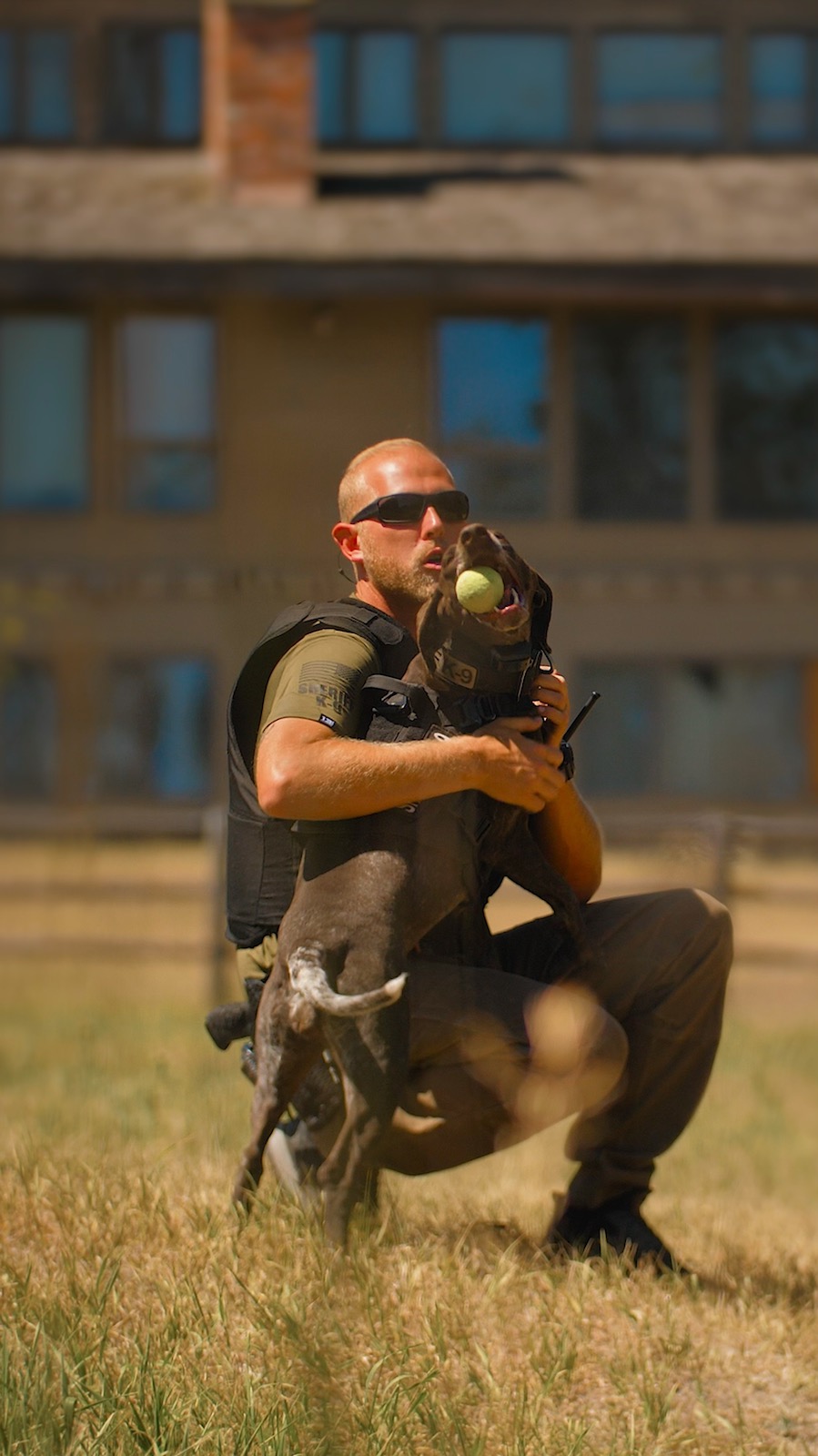 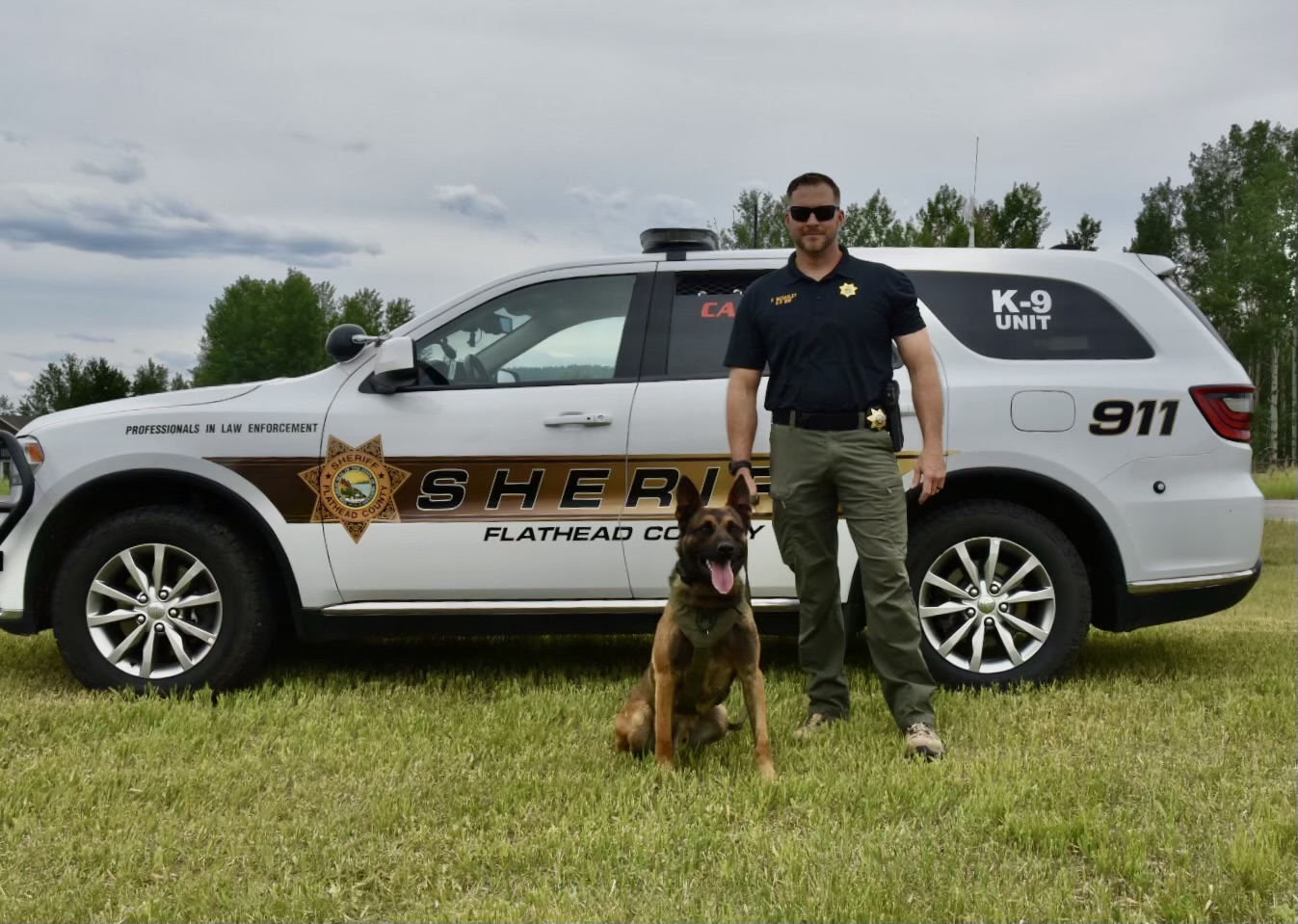 Pat McGauley is a Deputy Sheriff and canine handler for the Flathead County Sheriff's Office and handles K-9 Audie, a Belgian Malinois from Holland. Audie is currently a single-purpose patrol dog for FCSO and is trained in criminal apprehension, tracking, and evidence recovery.

Pat and his family moved to Flathead Valley in 2020 and Audie went into service for FCSO in July of 2021 after the two were a dual-purpose team in Northeast Florida. Pat worked two previous dual-purpose canines in Florida and has been a handler since 2009. He was an FDLE canine team instructor and the canine trainer for his previous agency. Pat and Audie are also currently attached to the Northwest Montana Regional SWAT team and provide canine support to various local agencies. 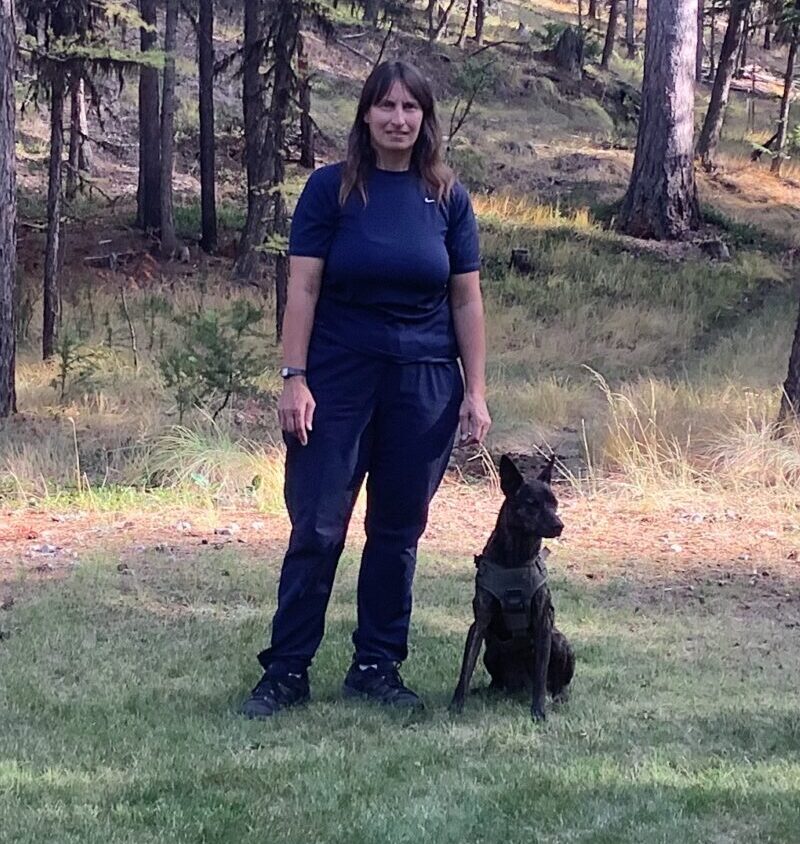 Diane Phillips was born and raised in the Flathead Valley. She joined the army right out of high school and spent 6 1/2 years as an MP/Physical Security NCO at various stateside and overseas duty stations. After the military she moved back to Montana and joined Flathead County Search and Rescue, where she has been a member for 13 years. The last 8 years she has been a K9 handler with multiple certifications with NAPWDA and IPWDA. Her current K9 partner is Mandy. 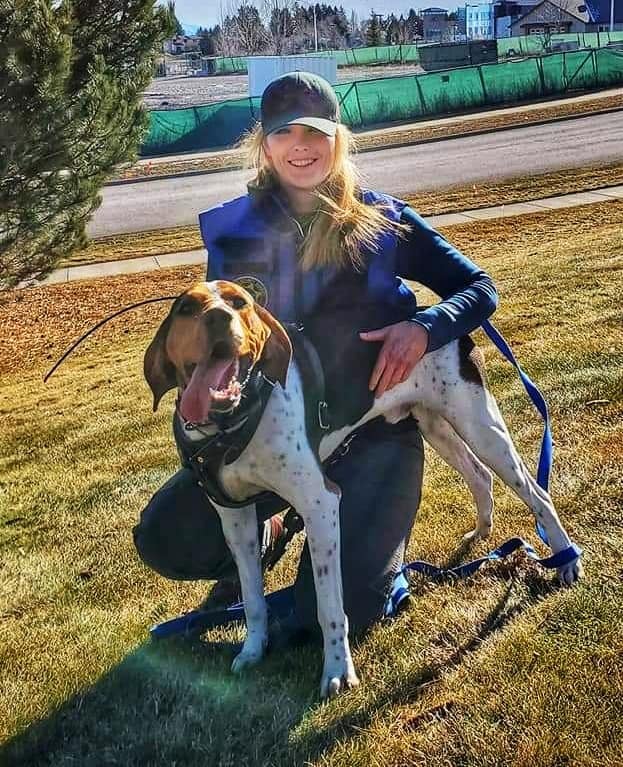 Dr. China Prentice is a veterinarian at Bigfork Animal Hospital and has been a member of North Valley Rescue Association since 2018. She is currently training her Walker Coonhound Johnnie in tracking where he is renowned for his baying voice when he is on the trail! You can see them at our PR events where Johnnie loves to meet people and be an advocate for the working SAR dogs, and of course his fellow hounds. Johnnie loves to camp and goes everywhere with China, including hunting trips, but never rides in the dog box!

China is known for being pretty tech savvy with the Garmin equipment and other mapping software used for SAR and tracking, and enjoys flanking on missions. She is the SAR liaison for the Montana Law Enforcement Canine Association and helps arrange the annual certification. China is an avid hunter, fishes and floats the numerous local rivers, and has a general passion for the outdoors and its amazing views! 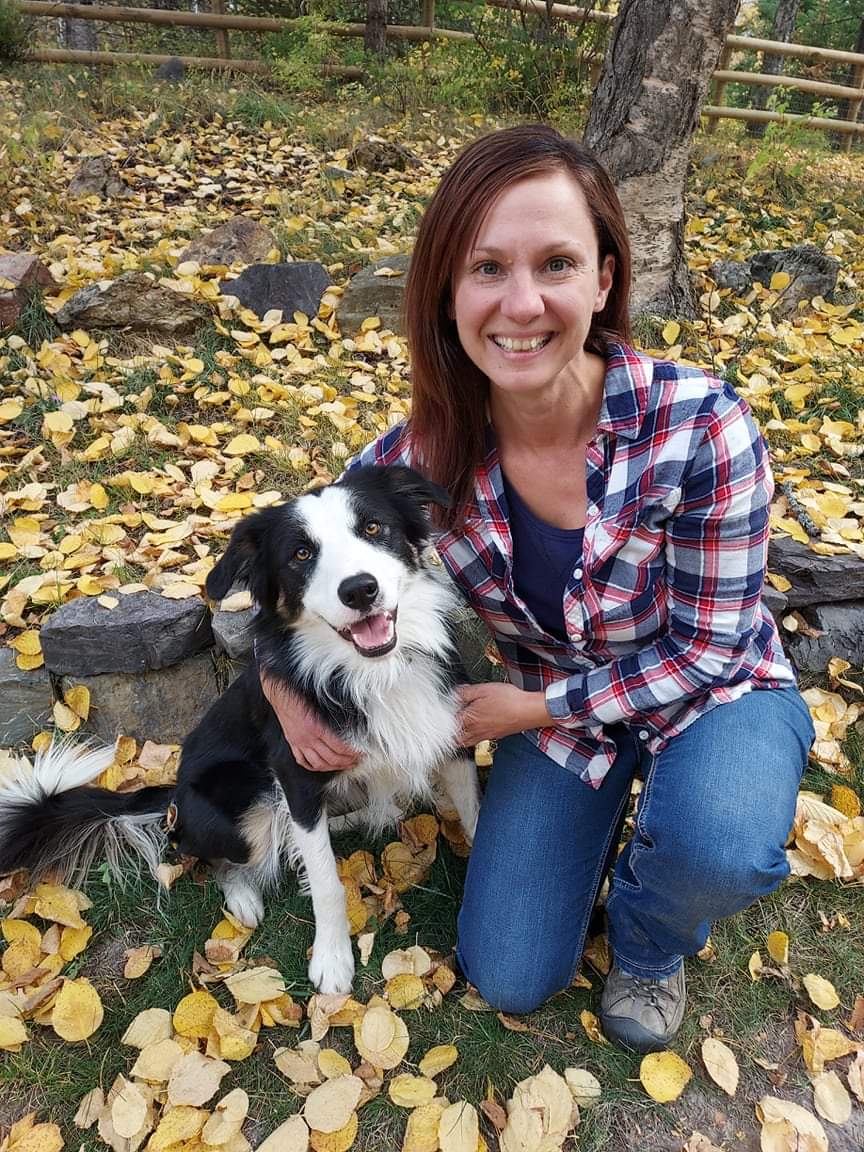 Carrie started her SAR career in 2019. She jumped right in with K9 Finn and they have been learning the ropes together. Finn is an exuberant border collie who believes in living life full out. He is being trained as a single discipline tracking dog. He is currently certified for Patrol track through NAPWDA. While certification was a huge milestone for this beginning team, they are focused on training more complex scenarios in order to be a valuable team during deployments. Working together is a daily occurrence for them. If they aren't tracking you can find them doing K9 fitness exercises, working on basic obedience, dabbling in trick training, playing bonding games or just going on a long walk.